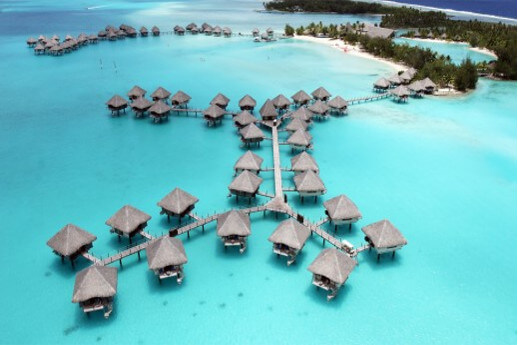 There’s something about an overwater bungalow that screams indulgence – thanks to their spectacular settings in exotic destinations, their luxurious furnishings and the often-hefty price tags that often accompany them. But if you’re looking for a holiday experience that wraps you in a bubble of pampered bliss (and earns the envy of your friends), an overwater bungalow is the way to go. Here are some of our favourites from around the world.

This group of 26 atolls, scattered into the warm waters of the Indian Ocean, could be considered the spiritual home of the overwater bungalow – it has been estimated two-thirds of overwater bungalows around the world are to be found in this island nation. Whether you’re coming for the world-class surf breaks or just to lie in the sun and soak up the serene environment, there’s bound to be something that suits, whether your budget is “extravagant and once-in-a-lifetime” or “just get me away from my life for a week”. One of our favourite luxury options is COMO Cocoa Island, whose bungalow designs are inspired by traditional Maldives fishing boats. Added bonuses include fabulous Mediterranean- and Indian-inspired cuisine, luxurious spa treatments, sunset dolphin-watching cruises and breath-taking private dining locations around the island.

One of the best-known islands of French Polynesia, Bora Bora boasts one of the world’s most improbably beautiful airports, set on one of the tiny white-sand islands (motu) that enclose the sparkling clear waters of the lagoon which in turn encircles the main island. Most of its resorts also sit on these motu, looking across the lagoon at the craggy heights of the island’s two extinct volcanic peaks, which provide the dramatically-beautiful focal point of a view that is even better than the postcards suggest. Even more remote, but with breath-taking views back to Bora Bora, is the neighbouring island of Taha’a, and the boutique Le Taha’a Island Resort & Spa. Best reached by helicopter from Bora Bora, there are just 45 overwater suites at this luxury resort. Be sure to treat yourself to the trademark Tahitian room service breakfast – fresh tropical fruit plus French pastries and preserves, delivered to your private deck by outrigger canoe.

Fiji has been relatively late to the overwater bungalow party, but now has three resorts that offer the option, the newest of which is the Fiji Marriott Resort Momi Bay. Located just 34 kilometres from Nadi airport, it’s also the most accessible, and although it only opened earlier this year, its position on a beautiful man-made lagoon, with a white sand beach that is something of a novelty on mainland Fiji, has made it a favourite destination for visitors who are looking for a luxurious, family-friendly alternative to the outer island resorts. Whilst you could happily confine yourself to the resort for your entire holiday, it also has the benefit of being handy to plenty of activities not normally on offer at a similar island-based resort, such as zip-lining and river-rafting.

Noumea is slightly more than a two-hour flight from Brisbane; closer to three hours from Sydney, offering the most easily accessible overwater bungalows from Australia’s East Coast and a great option if you’re looking for a taste of France close to home. From downtown Noumea it’s a relaxing twenty-minute boat ride to Ilot Maître, a small but perfectly-formed island which sits within a 200-hectare marine reserve that’s home to fish of every colour and shape imaginable, plus plenty of turtles, and the aptly named Escapade Island Resort. Once you’re on the island, relaxation is virtually compulsory, but if you have trouble sitting still, it’s a popular place to learn to try windsurfing, kitesurfing and sailing.

One of the most luxurious overwater bungalows you’re likely to come across is located a few minutes from Montego Bay in Jamaica: Sandals Royal Caribbean Resort. This adults-only resort has only been open since December 2016 so it’s still sparkling-new, and the attention to finer details is already setting it apart from the bunch. Your bungalow comes with its own private, infinity-edge plunge pool, a Jacuzzi, the now-obligatory glass floor and, perhaps most impressive of all, a personal butler.

There are numerous options for overwater bungalows in Asia, most of which are dotted around Malaysia and the Maldives, but if you’re looking for something a little different, Cambodia has the 4 Rivers Floating Lodge. Set on the bend of the Tatai River in the southwest of the country, the resort is a great base from which to explore one of the region’s most pristine wilderness areas: take a jungle trek at dawn, visit a traditional Khmer village for lunch, swim under a natural waterfall in the afternoon and finish your day with a sunset river cruise. Access is only possible by boat, but once you settle into your haven in the heart of the evocatively-named Cardamon Mountains, you’ll never want to leave.

Botswana’s Chobe National Park is located in the north of the country, bordering the Chobe River, and it’s known for having one of the highest concentrations of game in Africa, especially large herds of elephants, giraffes and Cape buffalo, all of which come to the river to graze on its lush floodplains. Just across the river, and therefore across the border in Namibia, the Chobe Water Villas offer a unique and luxurious option for viewing game. The villas themselves are set on stilts at the water’s edge and provide guests with 180 degree views of the national park across the river, or you can take advantage of the resort’s guided river safari cruises and game drives.