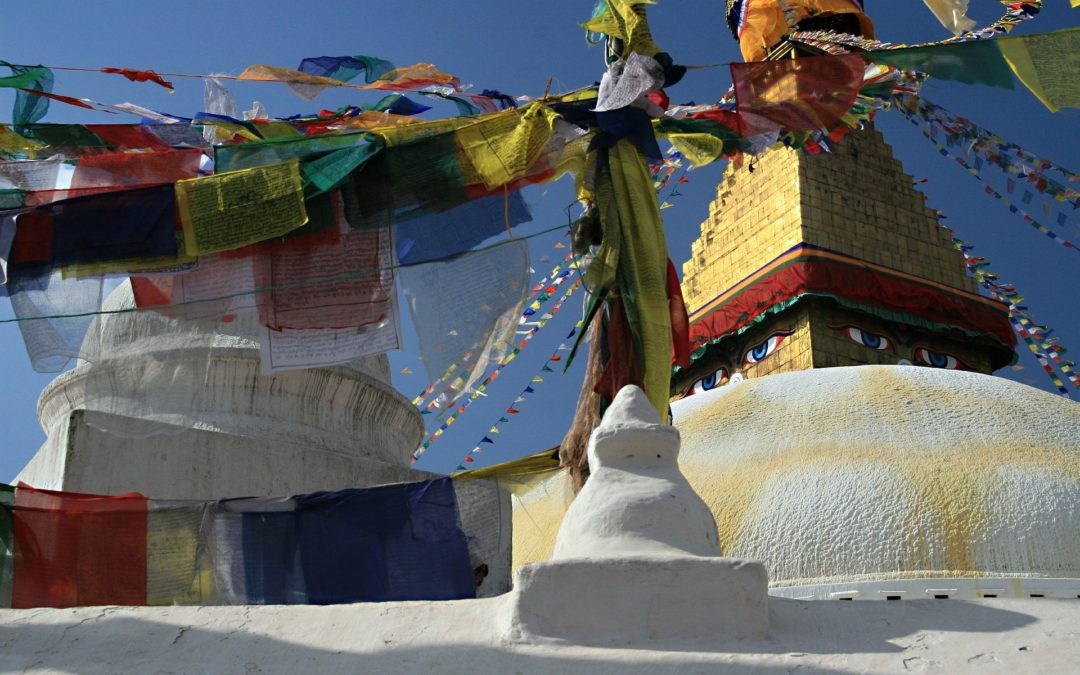 There are some places you visit where it feels like a holiday; the opportunity to take long deep breaths, switch your phone on only when you want to, delight in ‘treat’ moments like sitting on your butt with a drink in your hand or succumbing to the hands of a masseuse. And then there are other destinations that change you. Where something about the environment organically takes your entire perspective on you, and your life, to a dimension you hadn’t experienced before. For me, this happened during a trip to Nepal. 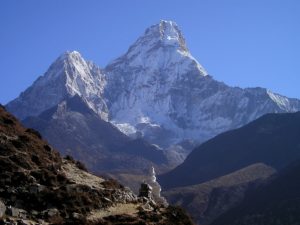 Through a sudden and excepted turn of life events I found myself free from commitments momentarily, and in a head space that screamed “it’s time to re-connect with me”. Perfect breeding grounds to spontaneously travel to somewhere that has both intrigued and offered an idea of remote escape from life as I know it. It was May 2016 and in a mere 5 days I planned, booked and embarked on a travel experience I’ll never forget. 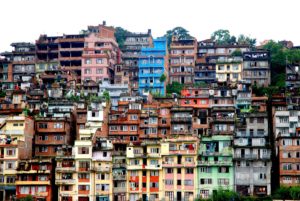 Kathmandu was a pleasant surprise. So much so that within 24hours of arriving, I arranged to change my return flight so as to stay in the country longer. What I’d expected to be little more than a grimy City serving as a gateway to more explorative parts of Nepal, was in fact brimming with exploration opportunities, welcoming locals, and fascinating culture.

Staying close to Thamel is definitely the best way to enjoy Kathmandu as this thriving area is the heart of the travelling community. Thamel’s streets are a maze of stores, houses and restaurants which line dusty routes for cars to narrowly navigate or rickshaws to pass through. Simply exploring the streets with a backpack on and following my nose was a trip highlight; there was no shortage of Nepalese local life to witness and interesting trinkets to peruse in the many stores.

For a walk through the streets of Thamel and Kathmandu in general, remember to look upward. The second story of buildings often have verandas which are perfect for a cold local beer and homemade curry, while watching the World pass by. As strange as it might sound, I stumbled upon Tibet Bookstore and spent what seemed like a whole afternoon gazing the shelves before leaving with an armful of books to bring home. The bookstore was once owned by Tibet Government in Exile and is now a haven of spiritual, historic and geographical books relative to the region’s culture. Many of the books here can’t be found elsewhere either. 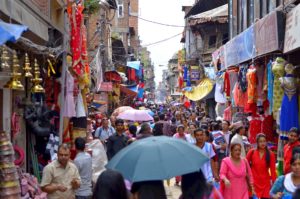 Visiting Durbar Square, near the famous Freak Street, is a popular tourist excursion in Kathmandu. Perhaps made even more interesting since the 2015 earthquake due to restoration projects, the square is a historic glimpse at Nepal’s yesteryear (think; Nepal’s version of Vietnam’s Hoi An). Intricate carvings and ornate detail of the period are cleverly crafted into the building’s architecture. When buying tickets to Durbar Square, be sure to check out the timetable and plan your route to coincide with a viewing of the Kumari Princess. She glimpses to the public for just a few minutes each day, and with such a fascinating story, she’s worth waiting for particularly as photos of her are forbidden.

After a few days exploring, my next adventure-within-an-adventure was a small plane ride from Kathmandu to Pokhara, along The Himalayas. If you’re planning to do a return route between Kathmandu and Pokhara (and every Nepal experience should include a visit to Lakeside Pokhara) it’s worthwhile travelling one way by plane and the other by road. This will allow travellers to capture the best of air and land scapes; both are remarkable. Keep in mind that there are 2 local airlines departing from Kathmandu, who have such high crash rates that they have been banned from many international air zones. To avoid travelling on these carriers have a travel agent book your domestic air travel for you. 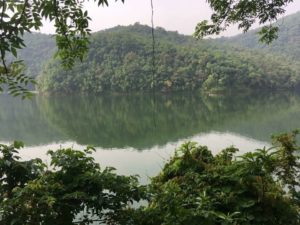 The flight from Kathmandu to Pokhara follows the snow capped Himalayan mountain range, at altitude seemingly parallel. There was certainly something magical about being so close to the world’s largest mountain range, and it felt luxurious to experience the Himalayas so close.

Pokhara is the second largest city in Nepal. For those who aren’t familiar with Pokhara’s best kept secret (Lakeside district) the city could present like a less interesting version of Kathmandu. Mostly a commercial epicentre that services greater Nepal and Worldwide, however on Pokhara’s outskirts is a very special place by anyone’s standards.

Lakeside Pokhara is peaceful, scenic, and serene. A popular start or end point for those trekking Nepal, but also a place where travellers may very well find themselves staying for much longer. Perched on the edge of Lake Phewa and surrounded by the Annapurna Mountain range, what struck me most was how quiet and slow the area is; like a hidden surprise nestled at the edge of an otherwise underwhelming city. 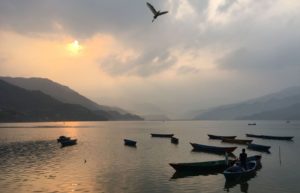 A small village, the one main street is lined with trekking supply stores – The North Face jackets and sleeping bags, walking poles or Western branded muesli bars – and in equal measures massage stores to soothe well exercise limbs, post trek. I spent two nights here before a trek of Annapurna, but felt like I could have lived here for eternity. At times I noticed myself sit for hours at the edge of the lake simply “being”.

Trekking Annapurna had long been an activity on my bucket list. Even since I’d learned of it from an old friend many years ago, the photos shared with me then had stayed with me all these years. In my memory were photos of isolated swing bridges stretching across ravines, leading to green bush. I knew then that one day I simply must witness the scenery myself.

To reach the allusive Annapurna dream I had resolved to do so with the support of a tour. Although it’s possible to trek Annapurna without a guide (permits are compulsory but easily obtained from the tourist office in Pokhara), it felt safer and more interesting to do so with others since I was a solo traveller. Up until this point I had felt utterly safe through my entire solo trip in Nepal and had no reason to question safety, but the decision to trek in a group was more based around interest, navigation and ultimately experiencing Annapurna without the hassle of finding my own path.

I chose a 6 day tour with Intrepid Travel which I booked in Australia before departure. The tour was low cost (around $500!) and I knew Intrepid had a solid and trustworthy reputation so felt more than happy with the decision. Initially I was disappointed to learn that I was the only traveller on the tour as part of my motivation had been to connect with strangers, though in the end it really didn’t matter. 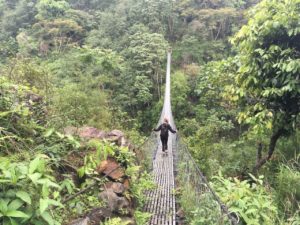 Beginning in Pokhara my guide, Sherpa and I set out for Annapurna. We walked between 6 and 11 hours each day at my elected pace and took in a variety of landscapes. Beginning with farm land we shared lunch in a local house before moving into hilly regions and valleys. At times it was hot under the sun and other times cool with mist covering plateaus. We walked through woodlands with leeches at our feet, crossed the swing bridges I had longed to see, and stood atop lookouts offering views of green bush stemming far into the horizon. We never grew tired of one another, many times simply enjoying our own thoughts or listening to nature in the trees. And natures colour palette was worth every systematic step trodden.

In the evening we’d find ourselves in remote, self sufficient villages. Their position from the city profound to me and their way of life seemingly primitive. The experience of being in these communities offered an insight into minority populations I hadn’t known existed before.

Time in the Annapurna’s seemed like mine. There were moments where life in the normal World felt to have stopped for a deserving 6 days. Day’s where nothing mattered but for the natural World around. Time that was priceless. 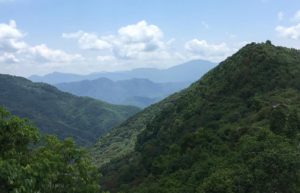 At the end of the trek I returned to Lakeside Pokhara feeling ready to speak with people and return to a social setting. One the days prior to the trek I had spied a row of outdoor restaurants edging Lake Phewa, with views of the Annapurna mountain range so returned to the spot to find an Everest Lager; the local beer I’d introduced myself to in Kathmandu and rather enjoyed!

Normally when I travel solo I’d consider myself to be an overly cautious traveller. I keep to myself as a safety mechanism, yet in Nepal I had felt much more safe than anywhere before. When sitting with my Everest Lager I began chatting with a table of local Nepalese and before long we sat together enjoying the moment. The next day 1 had offered to take me on a kayak across Lake Pewa to climb the hill that reaches World Peace Stupa. The guidebooks had suggested this is a perfect activity for views over the city and the surrounding mountains but that there had been reports of women being assaulted when climbing alone. As such, spending the day with my new friend seemed the perfect solution. 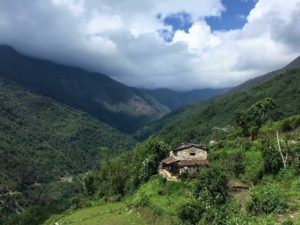 We hired a kayak and paddled over glass waters without a sound echoing by. Anchored at the bottom of the hill we hiked to World Peace Stupa, chatting with backpackers along our route. On our return we found a spot on the lake to jump in for a swim before heading back to shore. Lakeside Pokhara was like time standing still. I didn’t want to leave. But the day came to catch a bus back to Kathmandu.

I recommend a tourist bus for this route. They are inexpensive and convenient. I simply caught a taxi from the hotel to the bus depot but there were a lot of backpackers walking there and in hindsight there was no reason why I couldn’t have too. The bus was air conditioned and comfortable, plus with German, American and English travellers on board it offered a great opportunity to get to know other travellers. Taking around 6 hours between the two cities there is plenty of time to observe the landscape; hills, villages and rivers with rapids predominantly feature. Striking up a conversation with a German traveller on the bus, we decided to navigate our way from the bus stop to hotels back in Kathmandu together too.

My final nights in Kathmandu were spent at the iconic Kathmandu Guest House. An institution to Kathmandu, KGH pioneered tourism to Kathmandu and is situation in the heart of Thamel. What makes KGH even more special than the rich history and colonial architecture is that it is a peaceful haven behind giant gates, perched in the midst of city chaos. The perfect place to retreat to at the end of days exploring. 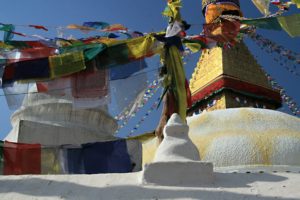 I’m sure there is plenty more that Nepal can offer. Chitwan National Park and Lumbini are the first to spring to mind. For me though, this trip offered the perfect blend of solo adventuring in the great outdoors without the need to be an extreme sportsperson, mountaineer, or even less appealing to a girl who loves green nature; spending time in the snowy mountains.