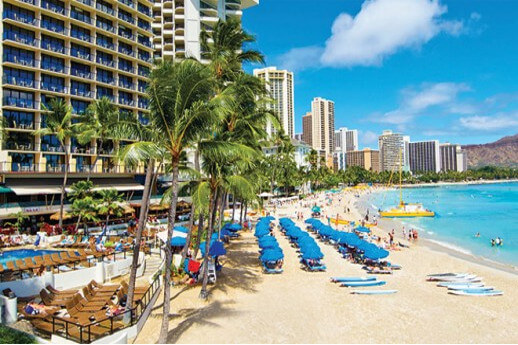 Hawaii is one of those destinations that seems as though it were made for couples: warm, sunlit days spent lazing on beautiful beaches or floating languorously in the warm ocean, followed by balmy evenings sipping fruity cocktails by the light of tiki torches. If you’re thinking about a holiday for two in the Aloha state in 2018, here are some of the couple-friendly activities on offer that might help you make that decision.

Whether you’re looking for a fun activity to do together or you just want to be able to keep up with a partner who already knows how to “hang ten”, a surf lesson is a fun way to get out on the water together. The waves in Waikiki are great for beginners, and you can drop into Duke’s Waikiki for a fish taco and a cocktail when you’re done.

There’s some pretty great shopping in Honolulu, including the upmarket, four-storey Ala Moana Center and Waikiki’s Luxury Row, which is home to luxury brands like Chanel and Gucci. If you’re really after a bargain, head for one of the outlet malls that are located a little further out of the city. Waikele Premium Outlets is one of the best, and you can let someone else worry about the driving if you take a shuttle bus from one of the convenient stops in Waikiki.

Hire a convertible, wave goodbye to Waikiki, leave the hustle of Honolulu behind and take the Pali Highway (also known as Route 61) east. Take the exit right before the tunnel and to reach the Nu’uanu Pali Lookout for breath-taking views over the beautiful beachside town of Kailua, then head through the tunnel and follow the Kamehameha Highway along the coast, all the way north as far as lovely Turtle Bay. From there, the highway curves southwest and passes the iconic North Shore surf spots of Sunset Beach, Banzai Pipeline and Waimea Bay. Stop at the Shark’s Cove food trucks for an ahi skewer, then carry on to the cute surf shops of Haleiwa, before heading south back towards Honolulu. Be sure to call in at the Dole Plantation for their famous, icy treat: a pineapple Dole Whip.

4. Head for the islands

Maui, Kauai, the Big Island: there’s a lot of Hawaii to see if you have the time to venture beyond Oahu, with some of the most romantic spots on earth. Watch sunrise from the summit of Maui’s Haleakala volcano, take a helicopter flight over Kauai’s spectacular Na Pali coast or take a horseback ride through the Big Island’s Waipio Valley for a swim beneath a secret waterfall.

Be sure to ask your personal travel manager for their own recommendations on the most romantic experiences and locations in Hawaii, and you’ll be saying ‘Aloha’ in no time!